​Each year, the Finland Futures Research Centre organises its annual conference, an invaluable opportunity for meeting, exchanging and debating current topics related in futures studies and foresight. With approximately 200–350 individual participants attending from all over the world, international researchers, organisational delegates, business people and students convene to the annual conferences in the spirit of futures-oriented information, research, analysis and collaboration.

This year we are celebrating our conference series with the 20th conference!

Welcome to the 21st futures conference! 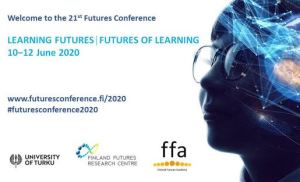 9/2019: Special issue of the FFRC’s newsletter ‘Futuuri’ is a summary of the keynotes and some of the sessions organised during the event. Read here the special issue of Futuuri newsletter 3/2019 in a pdf format.

27.6.2019: Presentations are now on-line. If yours is still missing, do send it via futuresconference@utu.fi.

24.6.2019: Thank you for attending the Constructing Social Futures Conference in Turku. We would very much appreciate if you took a moment to give the conference feedback through the feedback form.

4.6.2019: Book of Abstracts (pdf) as well as the final programme are now available on the programme page.

3.6.2019: Welcome to the side events on 11 June: PECOLO seminar in the morning and informal pre-conference get-together in the evening.